Looking for premium career services such as: career counseling, resume and portfolio review, and resume and bio writing?

The Power of Saying No – Part 2

You may think that you and Warren Buffett are worlds apart, but you both actually have one very important thing in common: the ability to say no. He does it all the time. You can, too.

It’s not always easy to know whether a yes or a no is the optimal choice to make. You don’t want to take on more commitments than you can fill (and fill well). So first you need to have a clear sense of how much you can handle. When you know what your limits are, it’s easier to stick to them. 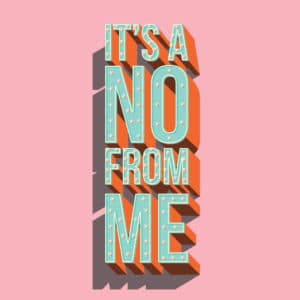 Be aware of how much you can handle. For example, if you know that your energy and ability to focus are at their peak around midday, then say no to invitations to go out to lunch with coworkers when you’re on a tight deadline. Similarly, keep in mind that nonwork activities can affect your performance in the office (ever try to write a report the day after you’ve stayed up all night binge-watching a series on Netflix?), so be ready to say no to social activities that could leave you too stressed or exhausted to do your job well.

It’s great to “dream big” and have lofty goals, but if you want to preserve your sanity you also need to realize that you can’t do everything (well, at least not at all once). Prioritize, so you can focus on what’s most important right now. When you’re faced with a request that doesn’t support those goals, you’ll find it easier to say no if you are clear about what’s most important to you.

Once you recognize that you don’t always have to be bound to say yes and that saying no at work is a viable—and legitimate!—option, the next step is to figure out how to deliver that no. The trick, of course, is to be firm about your boundaries without coming across as selfish at the expense of your colleagues or the organization. Here are a few tried-and-true strategies for saying no (or at least avoiding a yes) effectively.

Buy yourself some time.

When someone asks me to do something, if I don’t immediately know that I am 100% okay to add it to my to-do list, I say,

“Let me review my schedule and get back to you.”

Without committing me to a yes (or a no) that I might regret later, this response lets me give my calendar a close look to see if I can actually fit in one more thing—and to “weigh the stress-to-yes ratio” to see how another yes might affect my sanity.

Agree to part of the request.

When you don’t want to take on the whole task but also don’t want to say no to it, try this suggestion from stress-management expert Elizabeth Scott:

If you would really like to do what they’re requesting, but don’t have the time (or are having trouble accepting that you don’t), it’s fine to say, “I can’t do this, but I can…” and mention a lesser commitment that you can make. This way you’ll still be partially involved, but it will be on your own terms.

This strategy enables you to cultivate a reputation for helpfulness without having to take on more than you can handle. It lets you deliver a partial no with enough yes that you don’t come off as the bad guy.

Sometimes this is the best course of action. One option is to soften the blow a bit by saying,

“I’m sorry, but I just have too much on my plate right now to take this on.” 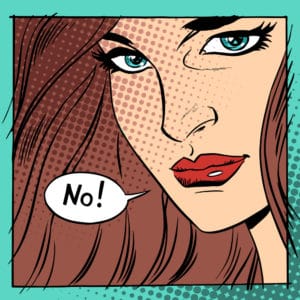 When that statement is delivered assertively (but with kindness, too), most people usually get the point and drop the request. If you get a little pushback, just respond with some version of “My schedule is too full for this” and end the conversation.

But if you’re dealing with someone who just won’t no for an answer, you may need to be even more direct. Research by management scholars at the University of Houston and Boston College, for example, found that people who make a clear statement of no (“I don’t do X”) are more successful at avoiding unwanted commitments than those whose statements (such as “I can’t do X”) leave room for attempts to persuade them otherwise. People can’t really argue with something such as

“I don’t take on more than I handle and still excel at my work.”

But they might seize open the opening that “I can’t find time for this” provides and try to figure out ways you could take on another commitment, even if you don’t want to.

Even though you want to convey a clear no when turning down a request, you do need to say more than just the word no. Context, audience, and the nature of the request are all factors that shape the best way to deliver that no. Think about the different groups of people who ask you do things, then figure out the best way to decline their requests. If you practice what you’ll say, you’ll have an easier time saying no when it’s actually time do to so.

For example, if you’re already underwater with work and your boss asks you to take on another big project, an effective no might include respectfully reminding her of the ramifications of adding more to your plate:

“I’m already under the gun for project X for you and will miss your deadline for that if I take on project Y. Would you like me to stop working on project X and tackle project Y instead?”

When saying no to someone, you want to be firm in your decision but also be kind (which sometimes entails softening the blow by providing an explanation or an apology). Remember, you’ll be working with your colleagues—and your managers—after you tell them you aren’t going to do something they want to do, so make sure your delivery doesn’t result in bad blood or burned bridges.

Final Thoughts on Saying NO 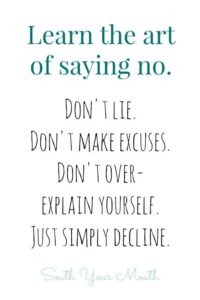 Saying no at work can actually lead to more yes in your life: yes to being more productive, yes to better work–life balance, yes to being happier. When someone asks you to accept another commitment, take the time to evaluate its role in your life. Can you handle the additional assignment without falling behind on other obligations (or losing your sanity)? Is the new task something that’s appropriate for you (given your role and responsibilities)? If you can’t say yes to those questions, then you shouldn’t say yes to the request.

The post The Power of Saying No – Part 2 appeared first on Val Grubb & Associates.

If you found this information helpful, please let us know how we can help you?

Read more from this author:
» Building Your Management Skills—Even Without Help from Your Company
» Look Out, World! Generation Z Is Here!
» Motivating Employees: Look Beyond Money
» Need more time for strategic thinking? Learn effective delegation!
» The Fine Line between Micromanaging and Empowering

Are you looking for resume help or personalized coaching? Check out our career services packages.

Time for your company to get noticed by qualified industry professionals looking to their next career stop. As your premiere digital media & entertainment job site, upgrade to one of our Featured Job Posting Packages

You Asked We Answered

Question: I've been out of work for a while. Do I take a job offer if the pay is awful?

Answer: Yes, taking a job, sometimes any job particularly if you have not worked in a while is good not only for your paycheck but for your mental health as you search for the job you really want. There is no shame in accepting work for honest pay. You are in transition and you need to remind yourself of that and not feel bad if the job you have now or are considering isn't willing to pay you what you are worth. There will be a job out there that will and you need to use all of your resources available including interim work to realize your goals. Taking a low paying job in the meantime may bruise your ego but it won't kill your pride or your wallet.